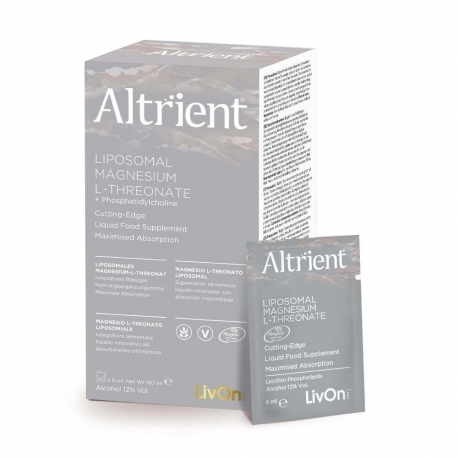 Jumpstart your winter workouts! This podium-worthy mineral is a true star when it comes to sports nutrition and exercise recovery. A welcomed addition for you pre or post-workout since magnesium contributes to electrolyte balance, normal muscle function, normal protein synthesis, normal energy-yielding metabolism, maintenance of normal bones and the reduction of tiredness and fatigue. Magnesium could even help you keep your head in the game as it contributes to normal psychological function and normal functioning of the nervous system. Interestingly, Magnesium L-Threonate (Magtein®) is the only compound shown to significantly raise magnesium levels in the brain.

This item is currently sold out. To receive a notification please subscribe with your email here:

For Healthy brain and memory?*

Our product contains Magtein ®️ which was tested in a randomized, double-blinded, placebo-controlled clinical trial on subjects 50 to 70 years of age. The subjects who took the combination showed significant improvements in overall cognitive ability compared to those who took placebo. Overall cognitive ability is a brain function score based on the individual’s memory (ability to learn and remember), attention and executive function (decision making and planning abilities).*

May facilitate learning and a relaxed mood*

Clinical trials have shown that Magtein ®️ can increase synaptic density, which has profound implications on our ability to learn. As the brain stores new information, by building networks of neurons, synapses are the connections that let the neurons talk to each other.

Strengthening them (increasing the density) is critical to maintain the ability to learn at any age.

Magnesium is critical for your body to absorb the calcium required to fortify your bones. Its ability to increase synaptic density is vital to nervous system functions as it strengthens the communication network starting in the brain.*

About half the European population is deficient in magnesium. Modern agricultural practices deplete soil of magnesium, leading to less magnesium in the foods you eat. Many common medications also deplete magnesium levels. Multivitamins often contain less than 1/4 of the RDA and absorption varies greatly based on the form of magnesium in the supplement. If you aren’t critically low on magnesium, you only absorb about 30–50% of dietary magnesium (https://www.ncbi.nlm.nih.gov/pmc/articles/PMC4455826/). Your colon eliminates the rest, which is why magnesium is often used in laxatives.

Magnesium L-Threonate (Magtein®️) is the only compound shown to significantly raise magnesium levels in the brain and encapsulating it in liposomes helps more of this water-soluble nutrient absorb into your cells where it’s needed to support learning, memory, and relaxation. The phosphatidylcholine that makes up the liposomes combined with Magnesium L-Threonate is a powerful way to support brain health.*

Using patented technology, we wrap the Magnesium L-Threonate in double-layered spheres (liposomes) that protect the nutrient through the digestive system and transport it into the bloodstream for absorption in the cells.

Magtein® may induce sleepiness, drowsiness or headaches. This may indicate a magnesium deficiency and is temporary. Reduce the dosage, consult a doctor, or discontinue use if condition persists for more than one week. Keep out of Reach of Children. Consult a healthcare practitioner before using this product if you are pregnant or breastfeeding, have a medical condition, or are taking any medication.